I started using this method, maxie.  I call it 'VisiPush'.

It's a simple method to focus your mind on a landing point and trying to get the swing moving to that point. I also wanted to take my focus off the clubhead at the top of the swing (to determine power) and which takes the main focus (landing) away.

I've tried to show graphically how to achieve this.  In the first photo I have picked a precise point (the end of the bunker) and then make a few 'waggles' up and down (shown by the curser) to get the mouse moving on the right line.  The blurring gives you an idea of how focussing on that point excludes distractions. 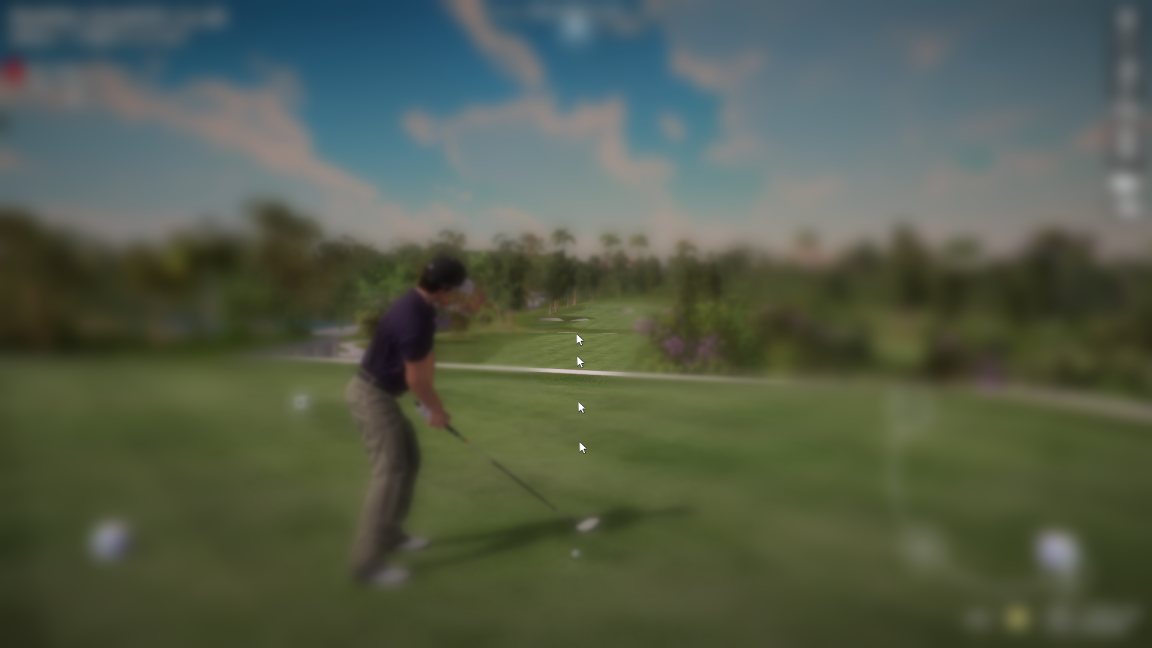 This next photo shows what your mind should be seeing and how fixed on your target you should be. 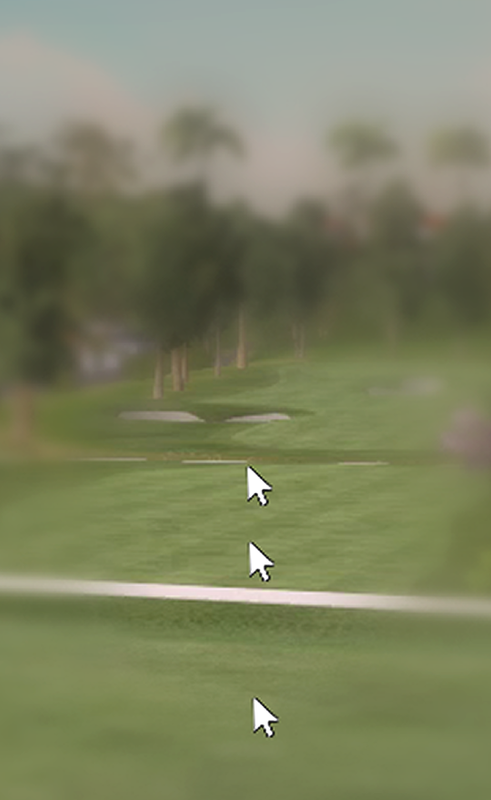 But if I'm focussing on the landing point how do I gauge the backswing? I found you can still 'sense' the top of the swing in your peripheral vision.  It's impossible to get an exact or optimum power point anyway. If I have to take some distance off I can 'sense' the backswing to that shortened point. It's quite successful. 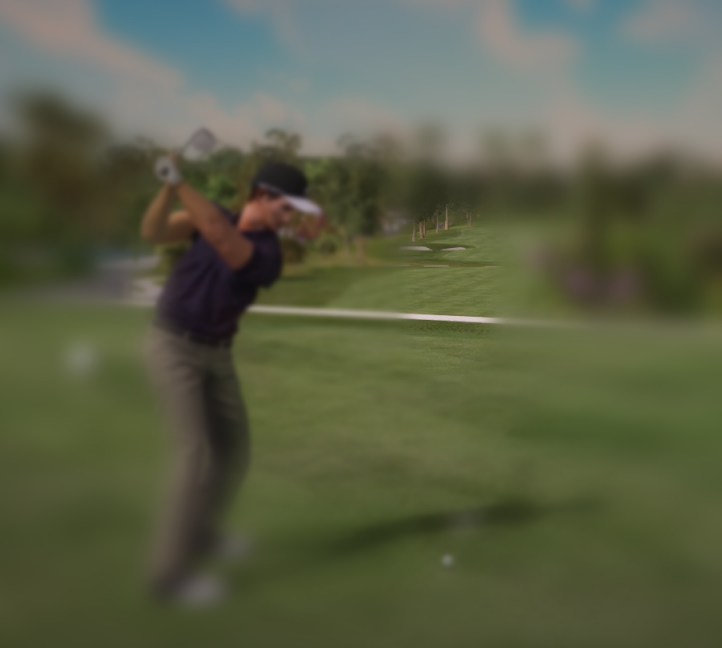 Tempo is important, of course, but I like to think in terms of 'rhythm'.  The above method seems to promote a more instinctive, rhythmic swing.  My advice would be to try to swing like the real thing.  Eventually the swing will become natural.  In my case, and even though it's Amateur, I am happy with my swing path consistency. And now that I have consistency the miss hits can be analysed better. If I miss laterally by 20 yards say, I can tell that I was too slow or fast in my swing and make adjustments.

After watching the Genesis it appears every player has as many miss hits as I do proving the magnificence of this sim.

very true the rts-m is great love it thx ted

Best way to enjoy a round the RTS-M  sometimes it all good and many times its just crap shots but love it when you play a good shot with good tempo and feels good and the ball lands where you wanted it. But many times you feel the shot was good and its crap, happens a lot is because of wrong temop bad heal toe , but fk it its the only way i will play and it feels like real golf

speeding up my backswing makes me go into the overswing , i find hitting 100% tough if i use a fast back swing, usually go into overswing resulting in bad shots.The hardest play is getting the 100%  mark its easy with a meter to get that but with the rts-m its hard to judge , well happy swinging , i refuse to play 3 click

You know, Ted, if you aren't swinging horizontally (as irl) you're just playing a croquet variant.

I have used horizontal and liked it. I might give it another go.

The Genesis Invitational was pretty intense trying to make the cut. I was at even par well into the second round but bad shots at the worst times made it hard. As it was, I had a shot from the fairway on the 36th hole to make the cut with an eagle so it was satisfying in a way.

Is anybody playing this Challenge (and following my rules)?  If there are at least two players having a go I'll keep posting my rounds.  PM me or reply here.

Anyway, it's on to the Honda Classic at the PGA National which has been superbly rendered  by Perfect Parallel.

The course is flat and so are the greens.  There's no roller coaster putts but there is enough subtlety to make shorter putts a bit problematic.

The cut at the Honda is generally around +1 and the winning total is around -10.  I've had a good practice round in benign conditions and confident I can make the cut there.

I'm playing along , Ted.  Though I usually use my Pro level player as that's my preferred skill level.  I'm not playing for competition, just the love of the game.  This is probably the only golf game/swing type where I can watch your ball flight and make a pretty good assumption as to what you did right or wrong in your swing.

Love of the game is a great motivation Joe.

No probs with Pro. The reason I encouraged Amateur is that it's a good entry level into RTSM. It also compensates for the difficulties with No-Aid putting.

Something else I should confess to doing is using the Free Cam as a caddy rather than the useless bloke they've given us.  Where a real caddy will tell you distances to things like front of green, back of green, water carry, and where to land the approach shots I use the free cam (just about every shot) to fly up to my landing spots and work it out.

Anyway, the Honda Classic is coming up and here is my first full on practice round.  I had 26 putts which gives you an indication of the greens and the ability to read them.  Best part of the game is the No-Aid putting.  Absolute sim heaven.

It looks like wind at Strong Breeze, pins at Easy for the first round, and the cut could be +1 or +2.  The wind will pick up apparently.  Any wind over 15 mph will cause havoc here.

I'll post my first round after the 1st round finishes.

Well that was interesting.

Made my first cut.  Payday coming up.  (Gaming excited (and I'm in with a chance!))

I am playing along. Have tried to record my rounds to send back but cannot get it to work. Any tips?

Great to hear briarfox.  I'd really like to play against another human and not myself.  (Even though I am possibly human.)

If you are playing against another recording it is hit and miss whether it will record.

But for any recording it appears that you should exit back to the lobby and WAIT.  Don't exit from there straight away or click anything else - just wait.  The way I can tell if it has recorded after waiting is when the top menu bar in the lobby can be navigated.  Until the game has finalised to save,  the top bar is sort of greyed out.  Just hover your mouse over the top bar options and the color doesn't change until saved.  Once the colors change (between grey and black) you can exit the game.

Made my first cut.  Payday coming up.

You are an Amateur you goose.

Winds still at 'Strong Breeze' for 3rd Round.  Pins at 'Medium'.

My tee time is in an hour.

It looks like I'm the one who will have to chase down Daniel Berger.

Have managed to save the first 2 rounds.

Great work briarfox. I'll check them out when it dries out here

Back to Perfect Golf